Today’s the last day to get a free copy of Make It Happen: The No-nonsense Guide to Publishing and Marketing Your Ebook! 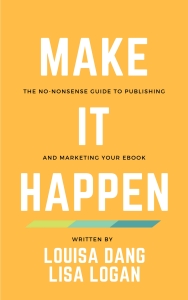 It’s a short, handy guide with all the fundamentals you’ll need to publish your book online — from setting up a clickable Table of Contents to choosing an editor to writing press releases.

So, give it a try, and if you find it useful, please leave us a review on Amazon!

I’ve been experimenting with the website pixton.com, which my friend Lisa Logan (also a writer) introduced me to. You can create your own comic strips or graphic novel – the trial period is free, and after that rates start at $8/month, which is pretty reasonable.

It’s a lot of fun, and as Lisa says, is also a kind of therapy. I’ve made comic strips about the election, my 3-year-old’s habit of shouting “Poop!” really loudly, and all sorts of things.

Anyway, I created a tiny ebook (PDF) for kids that lays out VERY basically how to write a story. Here it is if you’d like to share it with a kid you know. The age range is about 7 to 9 (my 2nd-grader helped me come up with ideas). So, please download it and let me know what you think! I’m hoping to do a longer, more detailed version at some point…eventually…

I’ve been working on a novel set in Scotland for the past hundred or so years. It was published as Rest and Be Thankful by the lovely Pilrig Press in Edinburgh, but since then I decided to re-write it for the American market and slant it more for kids aged 13 and older. So, I’ve been reworking it under the new title The Rain Catcher.

I thought I was finished a few months ago. The excellent Susan Buchanan of Perfect Prose proofread it for me, and I was all set to go. Then the doubts started creeping in… If you’re a writer, I’m sure you’re all too familiar with the feeling: “It’s just not there yet!” And “I just read this other YA book, and it’s much better than mine! I need to make mine better…” And “What if it’s too long/simplistic/complicated/short?” Oh, the debilitating self doubt!!

Anyway, I’ve decided to post little snippets of my novel here on Southern Bend Books. I would like to get it out there and see it from a different angle. Feel free to add your 2 cents if you like it or don’t like it, if you think it’s too “old” for a 13+ audience, or just anything you feel like sharing about your writing process! Cheers!

I dragged my suitcase off the conveyor belt and started to walk through the section that said “Nothing to Declare” when someone grabbed my shoulder. I shrieked, already jumpy from traveling all the way from North Carolina to Scotland by myself.

“Calm down, I’m not going to bite you!” a man in an orange airport vest snapped. Then he smirked. “Or maybe I will…”

I shuddered and jerked my shoulder out of his grasp.

“Are you traveling alone?”

Technically, I was an “unaccompanied minor,” although 13 and not exactly a kid. Not that it mattered; no one had met me off the plane. Once the doors had opened, I’d followed the nice American woman, Jane, who’d sat beside me, to passport control, where she’d gotten swallowed up in the swarms of passengers visiting Edinburgh.

“I need to search your luggage.” The man grabbed my suitcase and dragged it toward an inspection table, expecting me to follow him. My stomach started to ache. I missed Dad already.

The man’s walkie-talkie buzzed and he grunted importantly, putting his hand on my shoulder again, as though I was his property. An elderly woman sat on a luggage cart nearby, rubbing her stockinged foot. The passengers from my flight passed us, not one of them noticing I was being manhandled. Maybe people didn’t sue in Scotland. I glanced at the man’s security badge, wondering if he was really a terrorist who had sneaked into the airport, pretending to be an employee.

And then, out of  nowhere, came the shriek of a woman obviously used to telling people off: “Get your sweaty paws off my NIECE!” It had to be my legendary Aunt Claire.

She had the same bellow that Dad used when the parking attendant at the North Carolina State Fair told him we weren’t allowed to park on the grass. We’d sat in the car for 20 minutes, inching forward while car after car parked on the grassy slope near Blue Ridge Road. When it was our turn, the attendant said the lot was full, and we had to park on the other side of the fairgrounds. Dad couldn’t believe it. “There’s a spot right there,” he said, pointing at the patch beside a Toyota minivan. The attendant shook his head. “It’s too close to the road.” Dad and I stared at the road, about 20 yards away.

“Are you kidding me?” Dad wiped the sweat from under his eyes. It was 93 degrees that day. Flies buzzed through his open window. The attendant pursed his lips and tapped his watch. “You need to park ACROSS the ROAD,” he annunciated, as though Dad was three years old.

That did it. Something inside Dad clicked “on.” He sat up straight in his chair.

“That’s just FINE!” Dad is kind of shy and hardly ever raises his voice. But when he does, he puts every inch of himself into it. “Never mind that my taxes are paying YOUR wages.” The attendant began backing away from our car. “I’ll be sure to lodge a complaint with the Agriculture Commissioner.”

The attendant waved his hands. “Okay, Sir. You can park there. That’s fine.”

“Oh, no. I wouldn’t want to break any RULES.” Dad slapped the steering wheel and jerked the car into reverse.

“No, we’re just going to park in that field over there, next to the cows.” He pressed the gas, spinning up dirt as we careened out of the lot, the attendant still gesturing at us to come back. Now Dad uses his “State Fair Voice” whenever someone is trying to boss him around.

The airport security man’s eyes bulged at the sound of Aunt Claire’s State Fair Voice. She came marching toward us, lithe as a panther in her black leather pants and high-heeled boots, ignoring the airport official yelling at her from down the hallway to “Get your arse back here, Madam!”

The creepy guy let go of my shoulder– finally! – and waved his walkie-talkie at her, which only made her madder.

“Don’t you point that bloody thing at me!” I half-expected her to headbutt him.

She seized my suitcase, and the security man gasped. I guess no one had ever taken the power, literally, right out of his hands.